This upgrade of NimbRo-OP2 became operational for RoboCup 2018. It has the same size of 135cm, but is equipped with an Intel QuadCore computer and a strong GPU. Its 18 joints are driven by new Dynamixel-X series actuators. Not only its structure, but also its gears are 3D printed. For more details, see here

This robot was developed in 2017 for the RoboCup AdultSize class. It is 135cm tall and has 18 DoF: 5 per leg (parallel kinematics), 3 per arm, and 2 in the neck. Its weight is only 18kg. Its software was derived from the igus® Humanoid Open Platform Robot. For more details, see here 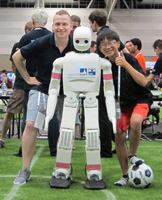 This robot was developed in a DFG transfer project together with igus® GmbH. It was shown first at RoboCup German Open 2014 and Hannover Messe 2014. The 90cm tall robot is equipped with 20 actuated joints: 6 per leg, 3 per arm, and 2 in the neck. The main computer has a quad-core processor. One or two wide-angle cameras can be placed in the head. For more details, see here 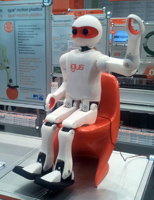 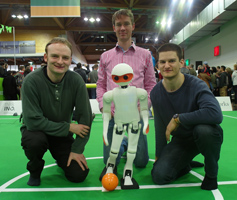 This robot prototype was developed with the support of the RoboCup Federation and the Korean company Robotis to promote the TeenSize class of the Humanoid League. It is equipped with 6 DOF per leg, 3 DOFper arm, and has a 2 DOF neck. The main computer has a dual-core processor. One or two wide-angle cameras can be placed in the head. For more details, see here.

Our newst TeenSize robot Copedo has a parallel kinematic mechanism in the 5DOF legs, 3DOF arms, and a had pan joint, which makes for a total of 17DOF. The robot is 114cm tall and has a weight of about 8kg. It's first competition was RoboCup 2012 in Mexico, where it (with Dynaped) won the TeenSize soccer tournament, the technical challenges, and the Louis Vuitton Best Humanoid Award.

Our TeenSize robot Dynaped was constructed in 2008 and competed for the first time in RoboCup 2009, Graz, where it won the TeenSize competitions.It was also the field player of our winning soccer team at RoboCup 2010 in Singapore and 2011 in Istanbul.
The robot has 13 active DOF and an additional passive joint in the hip. The legs include a parallel kinematic mechanism.

Bodo was constructed in 2007. At this time, it had 20 joints and was 80cm tall. It first played as a penalty kick goalie at RoboCup 2007 in Atlanta. The robot came-in thirs at the 2008 Dribble & Kick competition in Suzhou. It won as goalie, together with Dynaped, RoboCup 2009 in Graz, RoboCup 2010 in Singapore, and RoboCup 2011 in Istanbul. Due to rule changes, the robot had to be elongated to more than 100cm. It now has 14 joints (6 per leg, 1 per arm) and weights about 5kg.